I had the great pleasure of visiting the magical Tuscan city of Pistoia in March when I traveled there with renowned Pistoian photographer Luca Bracali. Michela Ricciarelli is lucky enough to also claim the charming Medieval town as her birthplace — and who better than a passionate local to provide authentic insight, photos and travel tips. Thank you, Michela!

Pistoia, Tuscanyâ€™s Hidden Gem: More than 5 reasons to visit -Â  a letterÂ to visitors traveling in Toscana from a local!Â

If you have the chance to visit Tuscany don’t miss my birthplace, Pistoia.

Because it is an authentic Tuscan town with few tourists and many Tuscan people living in a quiet, peaceful town with stunning, unexpected masterpieces of architecture in its historic center.

Pistoiaâ€™s location is ideally located on the northern side of the Tuscany, halfway between Florence & Pisa. You can easily reach it via a direct train from FlorenceÂ in 40 minutes, with trains running every 20 minutes.

In winter you can ski on one of the tallest mountains, Abetone, just a one hour drive from Pistoia.

In summertime, you can enjoy the beach in the nearby Viareggio on theÂ Tyrrhenian sea,Â  having a great time ðŸ¸ðŸ¥‚in the seaside restaurants & cafÃ¨s and many fashion shops along withÂ old art nouveau palaces.

Pistoia itself is worth a visit : the Duomo square is one of the most beautiful square of Italy.

Since the Middle Ages in this square, we have hosted the weekly market with clothes and shoes in another small square in the nearby. So, it’s an historical event held two times per week that still goes on in 2017!

The old palaces overlooking the main square of the city still have, at the present time, the same purpose for which they were originally constructed: So we still can be married in the Cathedral, get a mortgage for the new home from the oldest Bank still in activity in the world, get divorced in the beautiful old Court palace and get married again for the second time in the City hall palace!

Pistoia has Etruscan origins, so if you are interested in visiting the Archeological museum just in the Duomo square you could see oldÂ ruins & interesting testimonial of Etruscan & Roman periods.

Who could imagine that such a small town gave birth to a Pope?Â From theÂ noble Rospigliosi family, Papa Clemente IX was Pope in 1667 and his palace is now a museum that can visited today just close to piazza Duomo. You can also visit the free Embroidery Museum, unique in Italy and dedicated to a special Pistoia stitch called â€œpunto di Casale.â€ The museum also features magnificent handmade table cloths, ecclesiastic vests, tapestries and clothes with other beautiful stitches as well.

The Medieval romanesque period in arts is well represented in Pistoia with the so-called: “Romanico Pistoiese,” churches with stunning faÃ§ades with their notable â€œbicromiaâ€ (two-color) white & green marble. 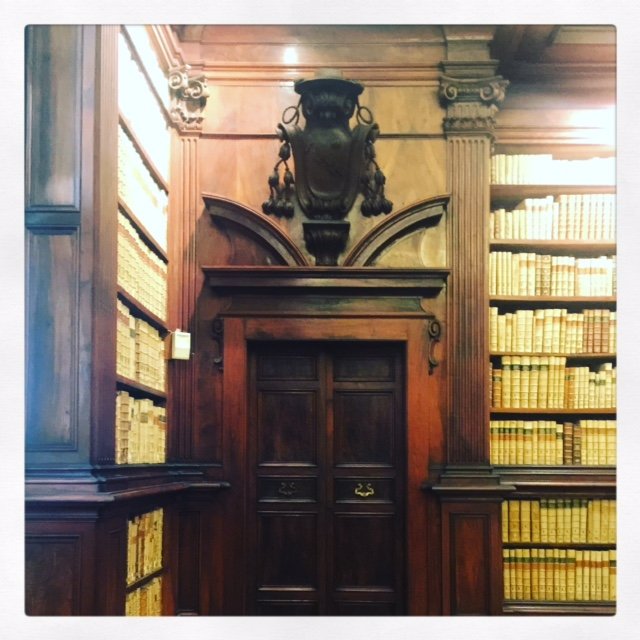 The old hospital, ospedale del Ceppo, founded in 1277, features an amazingÂ della Robbia’s freize dated to the beginning of XVI century and includes an interesting underground pathÂ for a guided tour (even in English!).

Did you know the third biggest dome of Italy is here? Basilica della Madonna of humility hasÂ a beautiful dome dated to 1562 designed by Giorgio Vasari ( yes, the same designerÂ of the Vasarian corridor in Florence).

Did you know Pistoia has the biggest library of Tuscany?

Biblioteca (library) SanGiorgio, opened just 10 years ago, is located near the train station. And did you know theÂ Forteguerriana Library, founded in PistoiaÂ in 1473, is one of the oldest in Italy with more than 220,000 books, 1,300 manuscripts, 126 incunabula and 3,300 16th century editions & many more?

Pistoia has been named Italy’s â€œCapital of Cultureâ€ in 2017 for its rich heritage and for all the cultural events promoted by the City HallÂ during the past years, but in my opinion it could have been considered even the capital of…..old pipe organs. Pistoia has a tradition of producing pipes for organs since the XVII century! You can visit many of them the cityâ€™s churches and even hear them playing during celebrations and the traditionalÂ vesprus.

Pistoia is also the capital of ……green. Greenhouses have been utilized for propagation for more than a century all around the cityâ€™s outskirts. We grow & export plants everywhere in the world and provide landscaping for the villaâ€™s private gardens & public areas, too.
At Pistoia’s first highway exit you can see the first plant nursery park of Europe with tall trees and great original shape examples of the original topiary industry.

For your relaxing momentsÂ  we have a huge choice of restaurants with genuine food & a colorful vegetable market every morning in a small square near the main one called “La Sala,” where during the weekends, locals stay for aperitivo and dinner with friends until afterÂ midnight.

For a countryside experience you just need ten minutes of driving away from Pistoia and you can experience a Chianti wine tasting in our hills with tasty extra virgin olive oil from local producers and I can assure you that it is truly a real, rural, authentic experience in little family-runÂ  farmhouses.

There are many other good reasons to choose Pistoia instead of another city in Tuscany, but I will tell you more in my next letter.

In in the meantime, just let me know if you have ever heard before of my birthplace and if you now, after learning more about it, wish to visit!